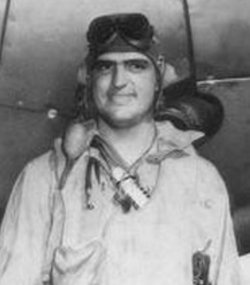 Orange County supported the war effort in many ways, but Naval Aviation and the Navy’s V-12 program was vital to our success at sea.  Everyone who called Orange County their home as they participated in the V-12 program deserves recognition.  We hope that family members and alumni will remember that and consider a memorial brick paver to honor one or more of them.  Many never returned.  Many were buried at sea.  This is just one of those stories shared with you in a video.

It was during the Battle of Manila Bay on November 5th, 1944.  Aviation Machinist Mate (Gunner) 2nd Class Loyce Edward Deen was the turret gunner in a TBF Avenger Aircraft.  The mission was with Torpedo Squadron VT15, Air Group 15, off USS ESSEX (CV-9) for Battle of Manila Bay. His aircraft landed safely, but his gun and his seat were riveted with shell fire.  His canopy was shattered and his body so tattered that it could not be removed.  His fingerprints were recorded, his body covered with a shroud, and his TBF Avenger was taken aft and placed in honor at center on the tail-end of the flight deck.

The crew gathered for committal services and prayer, then the TBF Avenger was gently slid off the deck into the sea.  Burial at sea was an all too common occurrence in battle, but this event was captured on film.  AMM2 Deen has the distinction of being the only naval aviator buried at sea in his aircraft.  It reminds us of the sacrifice made by the many Navymen and women, and, of course, Marines–many trained right here in Orange County.  We share the video with you…  We, local veterans and families of veterans, still remember the sacrifices of the many who did not return home.  How can we possibly forget?  Donate today.